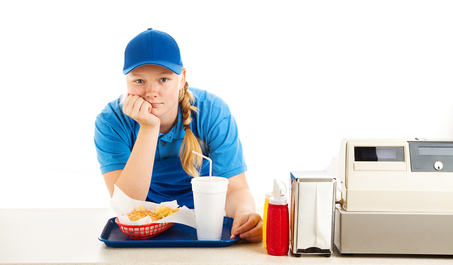 Don’t Give Your Power Away

Last week, I placed a drink order at a fast food restaurant drive-through.  When I got up to the window to pay for my order, a woman in her late teens or early twenties, took my payment. I’ll call her Miss Drive Through Window or DTW for short.  As I waited for the car in front of me to move, out of politeness, I asked how she was doing. I was not prepared for the response I got from her.

When other people upset you, you have given your power away.

DTW said, “I was doing okay, but now I’m not!  I am upset about something someone said!” I asked if it was a co-worker.  As she glared at the car ahead of me, she said “No, at some customers!”. She went on to tell me that two women had pulled up to the window and told her she should dump her girlfriend and go out with them.  She then told me that she had been with her girlfriend for over two years and she was not about to dump her to go out with those women. “I’m not that kind of person!” DTW exclaimed. “But, now I’m upset and I can’t believe they said that to me!”

It was obvious to me that the two “customers” she was referring to, were either acquaintances of hers or frequent customers with whom she had shared information about her personal life.  A typical drive-through customer, would not have known about her girlfriend. I think Miss Drive Through Window was flattered at the thought that the women found her attractive, and also a bit shocked that they had asked her to join them.

A two-minute interaction at a fast food drive-through, is hardly the setting for a deep coaching session, so I simply told her that those women were not worth her emotional investment.  DTW replied “It’s too late for that, I’m already emotionally invested!” I just smiled and moved up to the next window to pick up my beverage.

As I drove away, I thought about how we often give up our peace of mind and inner calm to people who make disturbing remarks about us or to us.  We are more careful about the way we spend our money, than we are about how we spend our emotions. In the case of Miss DTW, she probably spent several hours recounting the story to anyone who would listen, stirring herself up more and more as the day went on. Instead of taking control of her emotional bank account, she most likely, continued to spend it on the two women who had driven away earlier that morning.

You do not have to be a victim

When we allow others to have control over our emotions, we behave as if we are victims.  As a result, we feel powerless. If we choose to give our power away, we have no one to blame except ourselves.