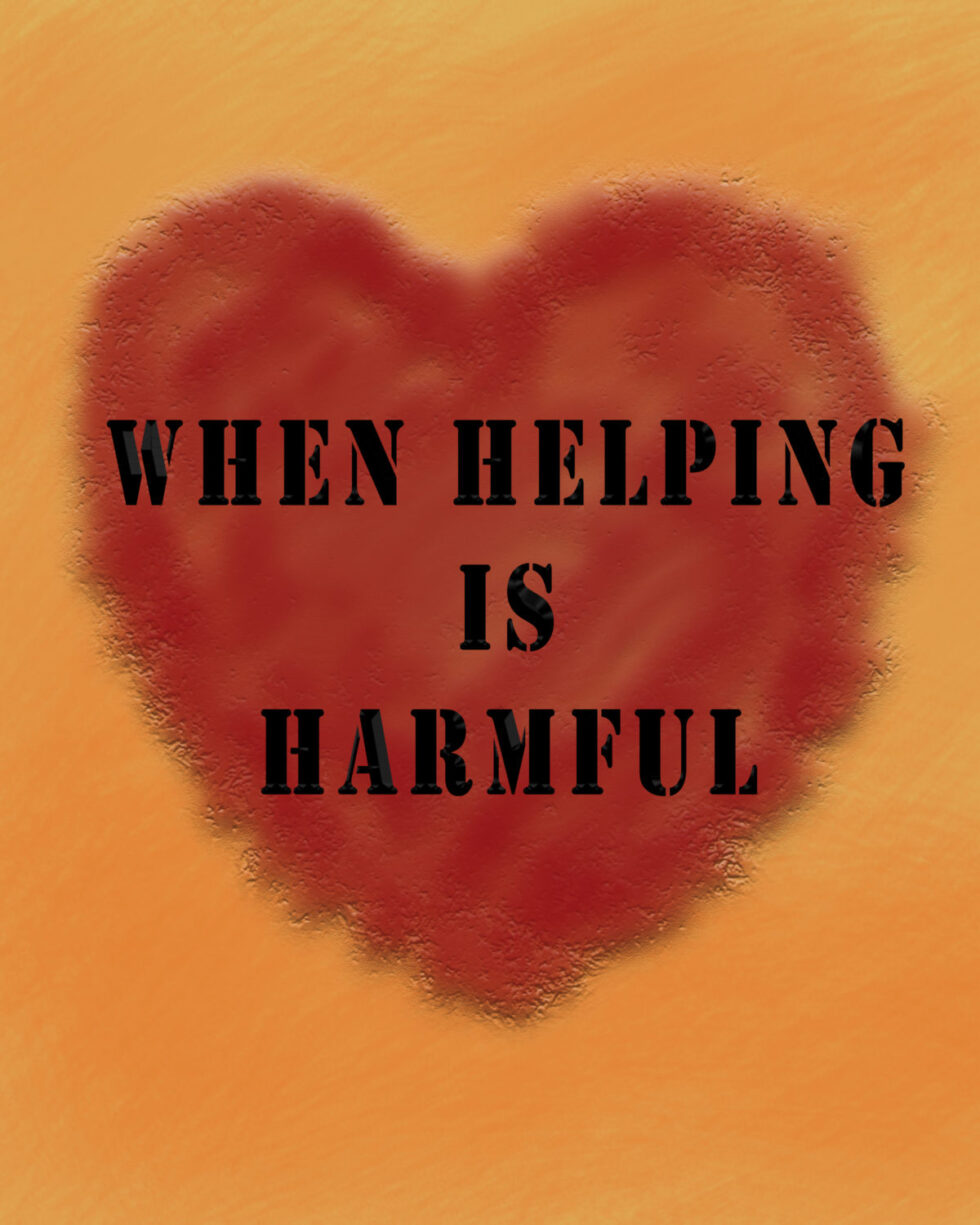 When Helping is Harmful

I believe we are all here to help each other.  Helping others is admirable, but there is a tipping point.  If we help too much, it can be harmful to others.

Consider adult friends, Suzanne and Debbie.   The women met several years ago. Suzanne felt sorry for Debbie, and took her under her wing. Over the years, Debbie has grown increasingly more dependent on her friend.   Debbie has come to rely on Suzanne to rescue her whenever she gets into a jam.  At social gatherings, Suzanne pays for Debbie’s drinks and meals. When Debbie gets in trouble, Suzanne cleans up the mess.

Suzanne believes she is helping Debbie.  It makes Suzanne feel good about herself. Sadly, while it makes Suzanne feel good, this kind of help is crippling to the person who receives it.  We gain emotional strength and confidence and learn life skills, when we face adversity and overcome it ourselves. When others intervene, they take away our opportunity for growth.  Debbie has learned how to accept help, but she has not learned how to trust her own abilities and help herself.

What Suzanne does not understand, is that Debbie is completely capable of taking care of herself.  Instead, Suzanne has bought into Debbie’s helpless behavior. She sees Debbie as less capable than herself and treats her that way.  The payoff for Suzanne is that she gets to feel like a hero. It’s a one person up and one person down type of relationship. In other words, Suzanne feels superior to Debbie.

Debbie’s helpless behavior has caused her to lose most of her friends. They all tried to help her,  but after awhile, they began to feel used and victimized. They felt exhausted and drained, and either broke off their relationships with her, or they chose to step back and let Debbie work things out for herself.  Unfortunately, the Debbies in the world, can always find another misguided person to take care of them. Unless Debbie is left alone to face her own challenges and overcome them herself, she may spend the rest of her life dependent on others.

People like Debbie, use guilt to manipulate others into feeling responsible for them. Because Debbie has been “helped” so much in her life, she has come to believe that she is less than others and that she is entitled to being taken care of.  She has become self-centered and self-absorbed. If Suzanne really wants to help Debbie, she needs to see Debbie as an equal and as capable of taking care of herself. That will make it easier for her to stop rescuing Debbie, and provide only moral support.

The relationship as it is, is not based on mutual caring and respect. It may fall apart if Suzanne withdraws her help.  In the long run, however, this could be beneficial for both women. They will either form a genuine friendship and stay together, or go their separate ways feeling better about themselves.

If you have a “Debbie” in your life, it might be time to take a look at how you are enabling his or her behavior. Have you reached a point where your helpfulness has become harmful?

Another article on this topic… https://lindathurwanger.com/2013/12/18/victim-or-self-reliant-individual/