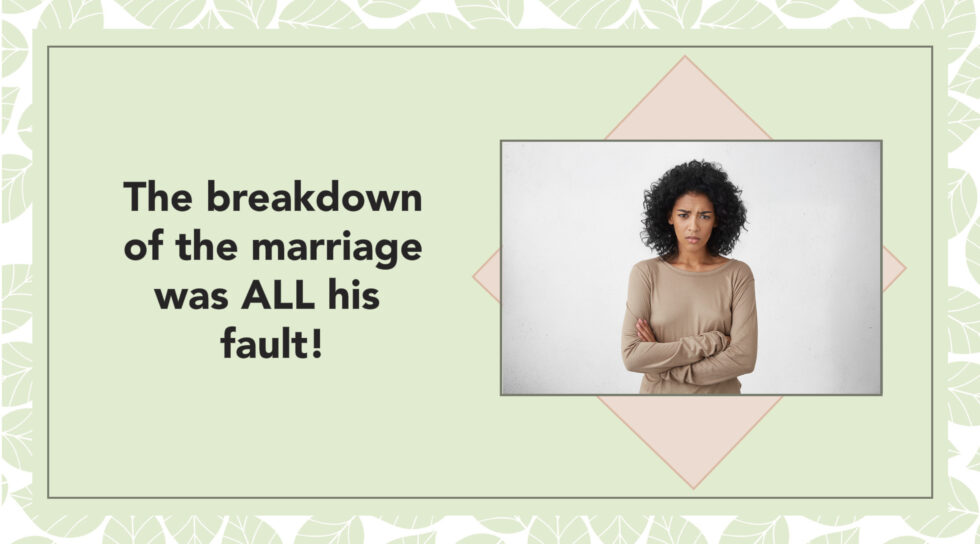 The Divorce Was All His Fault

I was married to a man who was physically abusive and refused to control his temper.  On top of that, he drank too much, cheated on me and loved to criticize me. It was easy for me to point a finger and say the divorce was all his fault, but that wasn’t the truth.

Was I responsible for his abusive behavior or the addictions?  Of course not!  However, I am the one who ignored the warning signs while we were dating, and I am the one who made the choice to keep giving him “one more chance”.  I was the one who was afraid to leave because I didn’t think I could make it on my own.  Finally, I woke up and realized that I could handle whatever came my way and that my children and I deserved a better life.  That was when I ended the relationship.

If you are convinced that your Ex was fully responsible for the breakup, and that you had no role in it whatsoever, you are not being completely honest with yourself. Or, if you are telling yourself that you were happy in the marriage and don’t know why it ended, you probably ignored the warning signs that something wasn’t right. Typically, if one person is not happy in a relationship, neither person is happy.

If we don’t get clear about our own role in the failed relationship and if we don’t learn to love and accept ourselves unconditionally, it is highly likely that we will find ourselves in the same type of relationship with the next person.

It’s time to shake off the old story you have been telling yourself and others. When you believe that someone else’s behavior was the only reason for the end of your marriage, you turn yourself into a victim. When you recognize that you also played a role, then you will stop feeling like a victim and realize you have more power than you think. From there, you can begin to leave the past behind to build the life you want to be living.